Woodlands (Singapore) - A grizzly bear was found dead in a HDB apartment located in Woodlands yesterday afternoon. The owner of the apartment alerted the police once they discovered the body and the police later classified the death as death by un-natural causes.

Investigations are underway but preliminary autopsy results showed that the grizzly sustained severe head injuries as well as scratch marks on many parts of the body.

Koala, who is the prime suspect in the death of the Grizzly, was brought in for questioning right after the discovery of the body. But due to lack of evidence, koala was released after being detained for 24 hours. 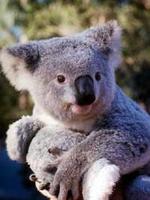 The startling murder took the island by storm as the general crowd speculate on how a small, cute, furry koala bear could kill a big fierce grizzly bear.

Undisclosed sources believes that Koala murdered Grizzly by accident. Undisclosed source said :"Koala would never be able to kill Grizzly even if it wanted to. The grizzly is just too big for the koala to even hurt."

Sources close to Koala belives that the murder was a freak accident where Koala was getting out of her double bunk bed and fell onto grizzly who was sleeping on the massage chair right next to the bed. The many scratches were believed to be caused due to Koala's panic at falling.

The Koala is not available to shed light on what exactly had happened yesterday. Sources said that Koala is currently undergoing medical treatment for the trauma.

On another note, Grizzly's funeral was attended by many close friends who are shocked that a big bear like him can be killed by a small cute furry koala bear. But it's a tough world out there and never judge a bear by its appearance.

21 red roses and 6 sunflowers sighted at the funeral were believed to be sent by Koala.