It's one thing to click on Technorati and search for Singapore related blogs, it's another thing to see this: 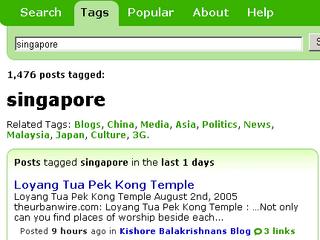 Loyang Tua Pek Kong?!? oh my gosh, someone actually bothered to write about that place?!? I went to the blog and got linked to here. Someone actually wrote an article on the temple?!?

Ok, for those who likes the temple alot, goes there to pray every now and then or maybe every weekend, pls go away, I'm gonna rant about certain things that are not very flattering to the temple..
..
..
..
all devotees gone already??
..
..
jus abit more space to be on the safe side..
..
..

Here goes.. The Temple is not as nice a place as some may think.. u know about the NKF saga, it's similar, but on a smaller scale of course.. Ok, it's not as bad as before, and I haven been down in ages, so everything I'm saying is based on what i hear from my dad, mum and what I heard whilst I was working there..

Yes.. I did work there before.. on and off during uni days as a part-timer, then full time for 3 months after I graduate.. I dun like working there, it's so darn far from my place (takes almost 2 hours to get there.. heng I got Darren to send me to work and fetch me back home, though not all the time, but it was good enough :) )

Come, let's go into abit of history between LYTPK and my family.. We first came upon it when my brother just got his license and practising in the Loyang Industrial Estate. LYTPK is a 24 hours place, they dun close and my dad started to go down at nites, and started talking to the in-charge there. This was when the temple was at its first location which is right next to the beach (the current location is technically beside a mangrove area :p the future location will be beside industrial buildings *boring*).

Soon, me, my sis, my mum and dad would go down every weekend, parents to pray and gossip with the rest of the auntie and uncles, me and my mei to play with the other kids around.. and the beach was a darn good place for star-gazing coz it's dark :p I also got my current doggy from there, when someone abandon her there.. there's always abandon dogs there, there are so many irresponsible pet owners around..

I'm proud to say my dad played an important part in saving the temple when it was ruled to be illegally residing on government land and was to be torn down, WITHOUT any new land for a new building and such. actual details are too lengthy to go into..

Anyway let's first talk about my surprise at seeing LYTPK on Technorati, and subsequently on theurbanwire. I would not be surprised to see reports and articles of lytpk on the chinese newspapers or even the Straits Times.. but an online newsmagazine by NP?! hmm.. probably taken in by the 4 religions crap.. (click on the pic below for link) 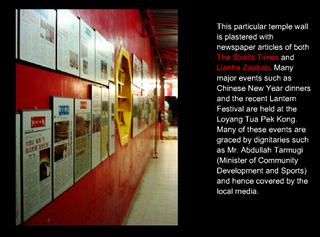 The chinese papers always feature the Temple, why, coz as long as you buy 500~1000 copies of the papers, they will send a reporter down to write an article. So for those who had been down to the temple, wondered why they always give out free newspapers when there's a LYTPK article in it?? now you know why.. They are not so nice to give away free stuff :p

Recently pple are all talking about the NKF saga, but I've already knew about all these things when I got involved in the Temple.. Money corrupts. When there's money, money and more money jus for your pickings in front of you, would you pick the money?? of course, anyone in their sane minds would. Free money leh, is there anything better than that?? if so, let me know oki :p

There were past stories where whole tins of money, those old-school provision shops tins oki, are taken into the cars and driven off.. of course the said person is no longer part of the ex-co. It's not coz the others aren't doin it, it's jus that he did it too blatantly and pissed pple off. The Temple is a place of political power struggle.. and I was a victim of it when i worked there.. was so darn happy to throw the letter.

There are other ways of money going into various pple's pockets, including giving out pay to pple who do not do anything and hardly contribute to the Temple except shooting their mouths off in public and in the meeting rooms; via the Temple buying overpriced goods from the suppliers..

Buying of overpriced goods is something that is hard to argue and proof.. but if you see all the receipts, u'll understand..

And there's always an abuse of power, pple throwing around the name of the Temple for various gains.. It's really ugly.

Religious harmony.. now there's something that Christians can never understand about Taoist.. They have a misconception about us, thinking that we pray to the deities for protection against ghosts and such.. There was once I went over to Darren's niece's birthday party, and one of his aunt came and talk to me. She was a Christian (in fact most of his family were, but he doesn go to Church coz he've seen its ugly side too..) and she was telling me how stupid the Taoist were, to spend so much money on the Hungry Ghost Festival, to appease the ghost and such; when u can jus believe in Jesus and there's no worries.. she said something like that.. and i was trying my darnest to hold back my laughter :p

Toaist scared of ghost?! she haven met my dad, he would be delighted to meet a ghost.. then can ask for 4d number. All the money spent on Hungry Ghost Festival is being spent by businessman trying to get richer, through their business or through 4d.. appeasing the ghosts? maybe in the past, but definitely not now. Also, they do it to show off to other pple that they have the means to spend on such stuff. What appeasing the ghosts?

The Temple is so popular coz alot of pple strike 4d after praying there. It may be a coincident, it may be real, or it may be jus statistics as so many pple go there, there must be a few who strikes everytime.. so religious harmony? it's really more of a gimmick.. 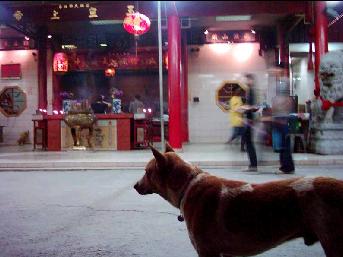 But still, no matter how gimicky it is, they still managed to draw crowds and supply me with my $20 ang pao every year :p so I'm happy.. :p

Haha.. honestly the situation is not that bad now, there's no more corruption (or at least none too obvious), less stealing (there are still pple with 3 hands), more auditors (PWC wor, damn expensive, and tons of cameras, even in the office..

It's still a nice place to go in the middle of the night coz there's free drinks, free food (at certain times), and toilet (but very dirty).. also there's the doggies.. that's Ricky in the pic, but it must be a darn old pic coz Ricky (or lucky or something that sounds like that) is fat and round like a sausage now.. look out for the dog that smokes, that's Ricky.. ok, not really smoke but have this finished cigarette in its mouth courtesy of Corporal la, who else :p

And there's a few nice uncles like Ah Boon Uncle, Chairman, Hong San (used to be nice till he got involved in some "interesting" stuff, which i might post some other time :P *hint* 19yr old girl), Yao Chun Uncle, Luku and alot more :)

So remember to go down, make donations so that I get my $20 Ang Pao next year okie!!